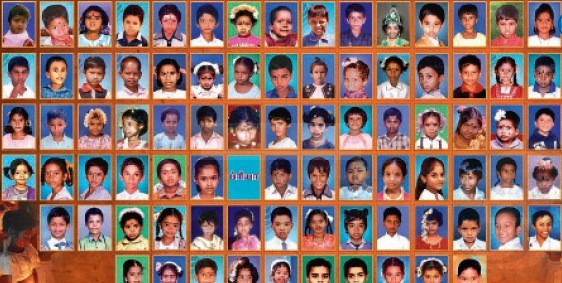 2004 Kumbakonam school fire incident happened in a school in Kumbakonam in the Thanjavur district of the Indian state of Tamil Nadu. A total of 94 students of the primary section of the Krishna English Medium School were burnt to death in their classroom as the thatched roof caught fire on 16 July 2004.[2] [3] The accident was one of the four largest fire accidents and the largest school accident in Tamil Nadu's history, as well as the second largest school fire in India in terms of casualties. A committee set up under the retired Judge Sampath found out that the heavy casualties were due to the wrong tactics of the management to admit extra students to a primary school and mislead the authorities about the student-teacher ratio. The Chief Minister who visited the site ordered the withdrawal of the recognition of the three schools, prosecution of the school authorities and the correspondent, and the suspension of the Chief Educational Officer, the District Elementary Educational Officer, and the Assistant Elementary Educational Officer of the Thanjavur school district. A compensation of ₹ 1,000,000 was provided to the next of the kin of the deads, ₹ 25,000 to the severely injured, and ₹ 10,000 to other injured victims from the Chief Minister’s Public Relief Fund. The district administration arranged another primary school in Natham village and accommodated 46 students under the Educational Guarantee Scheme of the government. The state government constructed a memorial park near Palakarai, Kumbakonam in memory of the lost lives, opening on 6 June 2010. The government also allotted housing plots to 59 homeless parents of 89 deceased students. After a long delay, a trial began on 24 September 2012 in the Thanjavur district court. The case had 21 accused people and had 488 witnesses that included 18 children who survived the accident. The headmaster Prabharan and three others were charged. Charges were also filed against 17 others, including Pulavar Palanichamy, his wife and correspondent of the school Saraswati, three teachers, six officers of the Elementary Education Department, the Kumbakonam municipal commissioner, the town planning officer, and four assistants of the education department. On 30 July 2014, the court sentenced school founder Pulavar Palanichamy to life imprisonment and fined ₹ 51,65,700. Ten others, including school staff and officials from Kumbakonam and state education department, were sentenced to five years imprisonment. Eleven of those accused, including three teachers, were acquitted.